AS2 has been widely deployed as a point-to-point connectivity method. AS2 offers many advantages over standard HTTP, including increased verification, and security achieved through the use of receipts and digital signatures. AS2 transactions and acknowledgements also occur in real-time, increasing the efficiency of document exchanges. Walmart was one of the first companies to help drive the adoption of AS2 across the retail sector. 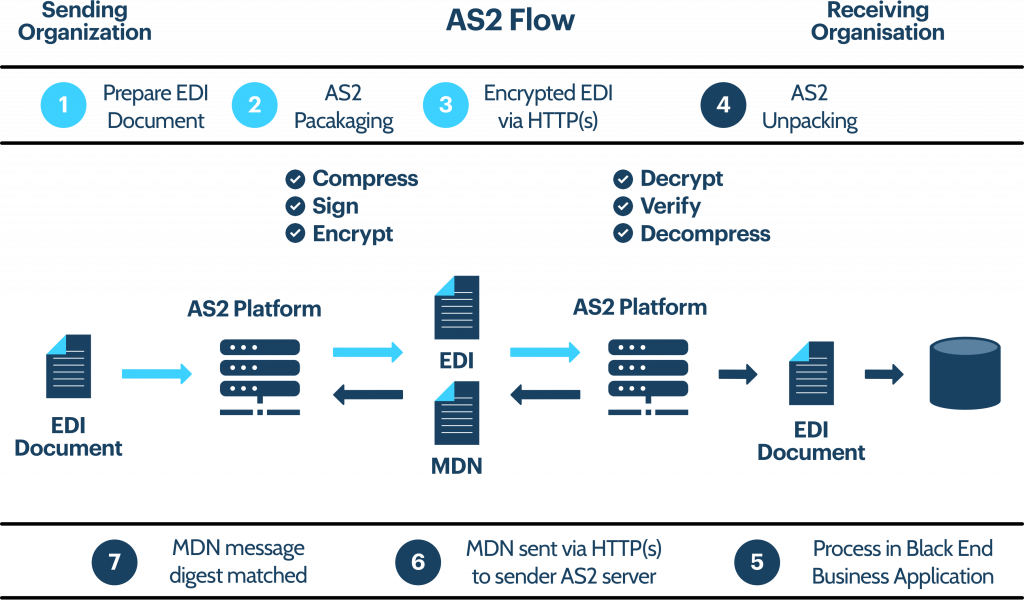 Need an AS2 Solution? Learn more about our Modern EDI products and capabilities

How Does AS2 work?

To establish an AS2 connection you need two computers, a server and a client. Both connect to the Internet via a point-to-point connection. In order to transmit the desired data, AS2 creates an envelope that enables secure transmission using digital certificates and encryption.

The process of establishing an AS2 MDN connection is as follows:

What do you need for AS2?

What are AS2 Certificates?

AS2 certificates enable the secure data exchange and security standards. Senders can generate and sign certificates, or preferably use certificates issued and verified by a trusted certificate authority.  There public certificates are exchanged in advance with the partner.

Signed Receipt-  A receipt with a digital signature.

Synchronous Receipt-  A receipt returned to the sender during the same HTTP session as the sender’s original message.

Asynchronous Receipt-  A receipt returned to the sender on a different communication session than the sender’s original message session.

Message Disposition Notification (MDN)- The Internet messaging format used to convey a receipt. This term is used interchangeably with receipt. A MDN is a receipt.

Non-Repudiation of receipt (NRR): A “legal event” that occurs when the original sender of an signed EDI/EC interchange has verified the signed receipt coming back from the receiver. The receipt contains data identifying the original message for which it is a receipt, including the message-ID and a cryptographic hash (MIC). The original sender must retain suitable records providing evidence concerning the message content, its message-ID, and its hash value. The original sender verifies that the retained hash value is the same as the digest of the original message, as reported in the signed receipt. NRR is not considered a technical message, but instead is thought of as an outcome of possessing relevant evidence.

Non-Repudiation of Origin (NRO) –  Non-repudiation is the assurance that someone cannot successfully deny the validity of something. If a trading partner has received a successful MDN, the sender cannot repudiate the fact they sent the As2 transaction.

S/MIME- A format and protocol for adding cryptographic signature and/or encryption services to Internet MIME messages.

SHA1- A secure, one-way hash algorithm used in conjunction with digital signature. This is the recommended algorithm for AS2.

MD5- A secure, one-way hash algorithm used in conjunction with digital signature. This algorithm is allowed in AS2.

In summary, the following twelve security permutations are possible in any given trading relationship:

1. Sender sends un-encrypted data and does NOT request a receipt.

4. Sender sends encrypted data and does NOT request a receipt.

7. Sender sends signed data and does NOT request a signed or unsigned receipt.

10. Sender sends encrypted and signed data and does NOT request a signed or unsigned receipt.

Hit enter to search or ESC to close